Most people think of upfront install costs only - but would you be surprised to know the cost to merely heat an average sized swimming pool (8m x 4m) in Australia, over 10 years can be many times the upfront $50k to install one? Stand-alone auxiliary heaters are becoming more popular but, if you put one in, without using a solar off-set from a solar pool heater and/or in combination with a transparent solar pool cover, you're looking at a multi $100K bill over 10 years in some cases.

Previously, we've calculated yearly on-going heating bills to heat an Australian swimming pool using our pool heating running costs simulator validated against the heat loading standards AS 3634-1989 and ISO TR 12596 1995, however these calculations do not include more realistic additional costs like, 5% interest, 3% fuel inflation and 20% loss in heater efficiency over 10 years. In this article we include these more realistic compounding costs and work out the total 10 year heating costs for a stand-alone heat pump and a gas heater systems. We then compare the saving you could get if you simply installed a solar heater or if you used a solar heater with a transparent pool cover (on 87.5% of the time).

To give some details - these calculations were performed for an average sized pool (32sqm) with average wind exposure, no shading on the pool (note, cost would be much higher), with light colored pool walls and floor. The solar heating system was simply a 100% coverage traditional well space PVC tube automatic system (equivalent to 67% of our OKU panels), installed on a 30° degree pitch North facing metal roof. Utility electric and gas rates used for each state were the same as used in our previous article on heating costs. The pool was heated to "well past what solar can do", meaning typically 1-2 months past a typical solar season. This is reasonable but not exorbitant, see our simulator for details in each state. Pool temperatures were held at temperatures: 28°C for Hobart, 29°C for Melbourne, Canberra, Sydney, Perth and Adelaide and 30°C for Brisbane. Simulating an auxiliary heated extend season up to only well pass the typical solar season is more realistic than showing year-round heating as not many people would heat their pools year-around.

We know that people dislike solar pool covers and usage remains low in Australia however, if you install solar and merely use a pool cover 50% of the time - on average you're likely to save over $100,000 on gas pool heating costs. Now let's have a look at heat pumps. 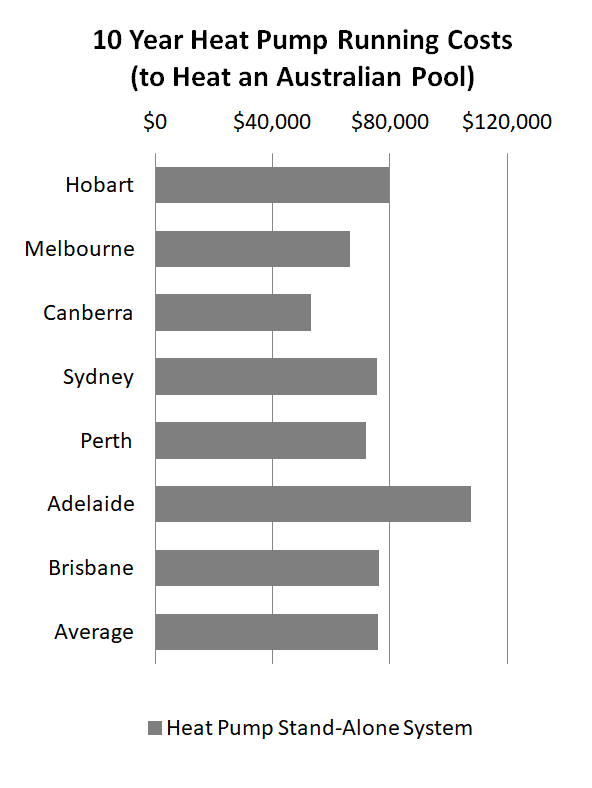 For a heat pump the situation is somewhat better for most states - the average running costs for a heat pump over 10 years was $76,000 - while the average savings when using solar to off-set heating costs was $36,000 or when a solar pool cover was used 87.5% of the time, the savings jumped to $58,000. In other words the saving from using solar based heating systems is still about the same as the initial cost to install the pool in the first place!

Now, while you would think this situation is as realistic as you can get for the average pool owner, it's actually not ... PooledEnergy is in a unique position to gain insight into people's pool usage habits, when they analysed minute by minute electricity usage, pool water temperatures, ect... what they found for average Sydney pools... "Across the three types of pool heaters available - gas, heat pump and solar..."

"... Solar is the most energy efficient and cost effective to run, followed by heat pumps then gas... "

"What our current data set suggests however is that people with gas or heat pumps simply aren't using them as much or at all as those with solar heating. You can heat your pool if you buy a gas heater but you probably won't! Given the significant cost of operating pool heating this is understandable. I suspect solar heaters and covers both get used a lot more by their owners."

The fact is people that install these auxiliary gas heaters and heat pumps as stand-alone heating systems without a means to off-set costs, soon get stung with huge power bills and promptly scale back pool usage, which is a shame as they invested $50K on average installing a pool they can't use as often as they would like.

Do you want to know how well a solar pool heating system will work for a specific set of conditions? Head over to our simulator and have a play with it :)